As promised, readers, here is an update on what Jumpin' Joel Flash is about, is doing, and will be doing in the near future. Joel is a quadruple threat combo of vocalist, instrumentalist, actor and songwriter... and all-round killer entertainer. So I guess he's a quintuple threat? Anyway, math ain't SceneRazR's strong suit, hot local art scene is.

Please follow Joel on the links listed below to check in on his gigs and other happenings (especially you awkward first date aficionados >:] ).

SceneRazr: There is a lot going on in a Jumpin’ Joel Flash performance – not just musically, but in terms of performance art and improvisation. When you build your show, do you have a particular goal in mind in terms of what you want the audience to take away with them?

Jumpin' Joel Flash: Above all else, I’m looking to entertain. People could be doing anything else with their evening… other shows, movies, dinners, art, Netflix, etc... If someone has taken the time to leave their house, travel to the venue, pay cover, and wait patiently for the act to start, I think we, as performers, owe it to them to deliver something to remember. I want people to leave saying “wow”. It’s happened every time so far. 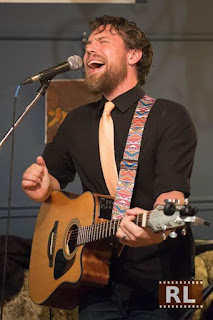 SR: The cover tunes you play run a wide gamut of musical styles. This is true of your original music as well. Do you have a particular genre or style of music that influences or inspires your process?

JJF: I’ve always been a classic rock nut. It was actually Weird Al that got me into it… his “Hot Rocks Polka” turned me onto the Stones and it snowballed from there.

In college, I joined a local cover band called Barrelhouse. Playing with them changed how I looked at music, and for the better. I wasn’t afraid or turned off by things that sounded like they were recorded after 1980. We played a metric ton of Allman Brothers, but could also play full sets of Steely Dan. Intricate, complex tunes that gave me an appreciation for wildly different styles and grooves. At one point, we were playing the entirety of Abbey Road front to back. It was madness. But it all worked. And it was a stupid amount of fun.

Their influence remains with me. I like the southern crunchy jams and grooves of The Allmans mixed with fun harmonies and odd song structure of Steely. It all comes back to the Stones though. If my act could sound like Exile on Main Street then I’d be in a very happy place. 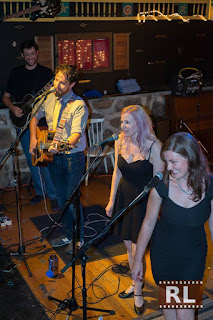 From left to right: Brad Cutler, Joel, Zoe Elizabeth and Robin Hodge
(as backing vocalists "The Ghost Lights")
(credit Ryan Lindsey Photography)
SR: In addition to performing in various musical acts, you’ve recently explored acting – and now you have also developed the score for an original musical – Phantom of the Opry – that will be staged in Ottawa in the near future. Could you walk us through how that evolved?

JJF: My wife began starring in a number of Local Director Brett Kelly’s films, including Homicycle, Raiders of the Lost Shark, and SpyFall. I began hanging around the sets and was eventually asked to try out for a couple of roles. Then I saw the open casting call for My Fair Zombie. My experience with musical theatre was absolute zero, but I dig zombies and I can sing, so I thought I’d give it a go.

I auditioned and got in, which was both a wonderful surprise, and a dreadful feeling of doom. I’d never acted….let’s say ‘theatrically’ before. Luckily, I was surrounded by such an amazing group of people that were happy to answer all my questions and guide me through the process. I was awed by their talent every time I saw them. I’m happy to call them all friends.

After My Fair Zombie was over, Brett asked if I had any interest in writing the score for Phantom. Having never composed for theatre before, and having no musical director experience, I of course said yes.
SR: As well as being an insanely gifted singer, you play guitar in Jumpin’ Joel Flash, and play occasional trumpet in Fuzzy Bunny Slaughterhouse – also in Barrelhouse, your erstwhile blues lineup. Any other instrumental talents you haven’t told us about?

JJF: I can beatbox, but I haven’t yet figured out how to channel it into a performance. I also do a great impression of Stuart MacLean. Maybe they should be mixed? Vinyl Cafe R-r-r-r-r-remix? 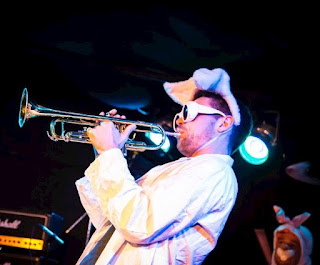 If i could get my hands on a keytar, I bet i could play that as well. Only if it’s hot pink though.
SR: That kerfuffle in the House of Commons where one MP made a fart simile during Question Period, and another MP said she was out of line: are you on “Team Fart,” or do you fall firmly on the lines of observing the timeless traditional courtesies of parliamentary procedure?

JJF: More gigs fo’ sho’... I’m hoping to play around town as much as possible in 2017! The band is growing and is currently made up of some insane talent: The guitar stylings of Brad Cutler make everything we do all the more ethereal and epic and insert another ‘e’ word here. And I can’t go on enough about the vocal and performance stylings of The Ghost Lights… Zoe Elizabeth and Robin Hodge give our act a major dose of energy... their theatre background shines brightly in everything they do. They sound incredible and put on a show you won’t forget.

And definitely people should come and check out Phantom of the Opry at The Gladstone this February!  The actors are wonderful, the script is hilarious, and the 10 original songs I’ve composed will get stuck in your head!  Lord knows they’re stuck in mine.

Also looking to record my first album! There is more than enough material… it’s just finding the time at this point. Also will need to get a few session players… or permanent band members perhaps?  Always interested in applications!

SR: Thanks for taking the time to talk with us Joel, and please continue to keep SceneRazR looped in with your future projects and performances. Our esteemed readers can find Jumpin' Joel Flash updates at www.jumpinjoelflash.ca or contact him at jumpinjoelflash@gmail.com. In terms of band auditions, Joel is currently looking for keys and horns, so all you keyists and hornists should get in touch with him without delay!